When Bridgerton Season 1 came out on Netflix back in December of 2020, it made waves. Much of the press following its release was focused on the diverse casting (diverse in some ways but not many, watch Khadija Mbowe’s video for more information) and aesthetics. Quickly after its debut, the show came under fire for its historical inaccuracies, mainly with the costuming, but the creators of the show and costume designer expressed that historical accuracy wasn’t a part of the show’s agenda. In an interview with Slate, costume designer Ellen Mirojnick addressed her approach to costuming by observing, “There [needs to be] an element that people that are watching it today can really dive into and not be taken back to a time in history that they can’t relate to—that there’s something about this that gets them swept up immediately in the story.” This philosophy seems to have been followed during the production of the most recent season of Bridgerton which was released in late March. The second part of the Bridgeton family’s story was also pronounced historically inaccurate, but with less fervor, so audiences and critics may have learned to not expect period-accurate clothing.

Two videos by fashion YouTubers Mina Lee and Karolina Żebrowska titled i went from being a bridgerton HATER to a STAN and “Bridgerton” Costumes Are Both Better And Worse This Season respectively, both detail the specific costuming inaccuracies, as well as how the costuming choices represent the show’s characters and genre. An example of inaccurate costume choices to the benefit of a character is the paisley patterns used in the Sharmas’ clothing. The paisley pattern, also called “buto” or “boteh” in Persian, as well as the colors the Sharma women wear, connects them to their Indian heritage. 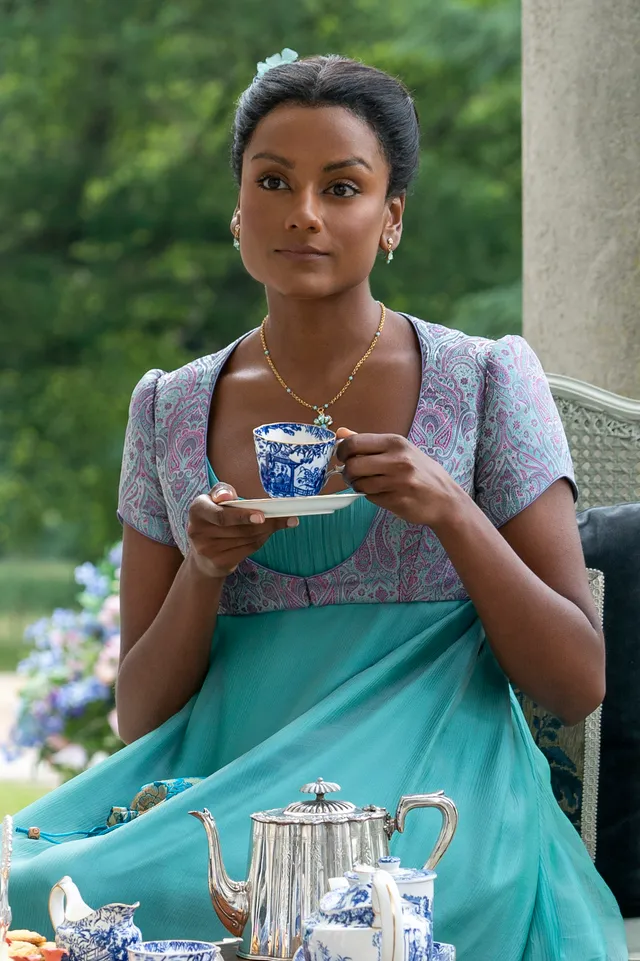 This choice, though straying from the historically accurate path, is emblematic of Bridgerton’s reach from the regency era into the present. Like the multi-racial cast, representing the white, European history of the regency era, the costuming choices are aware of modern culture. While it is clear that Bridgerton should not be taken as a history lesson, it is an idealistic, more colorful (in many ways) reimagining of the past.

In her video on its second season, Mina Lee shares her opinions on how Bridgerton should be approached, “I think most of the people who are staunchly anti-Bridgeton are just traditionalists […]. I think it’s worth setting that boundary between a costume drama and Bridgerton because they are inherently two different genres and they deserve like different reference critical lenses when we’re viewing them.” As Mina Lee explains, Bridgerton is meant to go against the grain of a traditional costume drama, like the 1995 Pride and Prejudice mini-series (which I can’t write an article without talking about, clearly). The show is similar to a costume drama, but the atmosphere it creates is different. While traditional period pieces have a heavy and dramatic feeling, Bridgerton strives (and mostly succeeds) to retain the drama but set it in a strong and vibrant world. The historical inaccuracies were the results of choices made to connect the early 19th century to the present, allowing the show to create its alternate version of the past.

The modern lens, chosen by the creators of Bridgerton, not only impacted the historical accuracy of the show but also the feeling of nostalgia it cultivated. As someone who enjoys period pieces, when I watched the first season Bridgerton immediately felt different to me. And the second season felt even more divergent from the mood of other period pieces. Where period pieces often feel a bit stifling or slow, Bridgerton felt quicker and more spirited. But I felt another difference as well, a lack of nostalgia. Bridgerton, like all other shows set in a period besides the present, plays on nostalgia to gain viewership and set a tone. Nostalgia, or more appropriately anemoia, coined by writer John Koenig as nostalgia for a period you’ve never experienced, is a popular feeling the entertainment industry exploits. But with Bridgerton, I supposed because of its modern elements, it lost some of the nostalgia its setting provides. Bridgerton’s music and aesthetic sensibilities are both parts of the show I appreciated but since they pull the show closer to the present viewers are less immersed in a foreign time. When you watch a traditional period drama, the tone reinforces the period, but Bridgerton’s tone is bright and modern, blocking some of the nostalgic feelings that could be caused by period-accurate elements.

This is not to say that Bridgerton was devoid of nostalgia or anemoia, I still felt a longing to be in the Bridgerton world, it was just a different sort of nostalgia. Instead of capturing nostalgia for the regency area, Bridgerton capitalized on the yearning viewer had for pre-pandemic life. Part of the reason Bridgerton season one was such a hit was that it was a beautiful escape to a world of parties, romance, and an ever-evolving social scene. No wonder viewers were enthralled, Bridgerton showcased what they were missing fantastically. Bridgerton season two, released during an unresolved state of being, in between pre-pandemic life and lockdown, was less nostalgic for a Covid free time but still involved viewers in lost elements of life. Not only did this contribute to both seasons’ commercial success, but it replaced the lost elements of anemoia for the regency area, with the nostalgia of a different kind.

When entertainment looks into the past and creates a period piece, it will always deviate from accuracy, just because we can never fully represent a time of life that no one involved in the creation has lived. Additionally, period pieces like Bridgerton use the romantic versions of the past to gain viewership. I would warrant that when people watch a period piece, they want to see the best parts of it because like all entertainment, it is an illusion, a make-believe past that exploits nostalgia. Accuracy for the sake of education about the past is noble and needed, but with shows like Bridgerton, which purposefully change the past as they reflect, they are creating a fantasy for emotional and social benefits. Both are important, and neither should be the standard. And the modern elements that Bridgerton incorporated into their retelling of the regency area, weakened the nostalgia for the period but also strengthened its nostalgia for pre-pandemic life. As Bridgerton exhibits, the sacrifices it made and the liberties it took with period accuracy, allowed it to express its vision and tailor itself to viewers. Like anything, a reflection of the past is a balancing act.